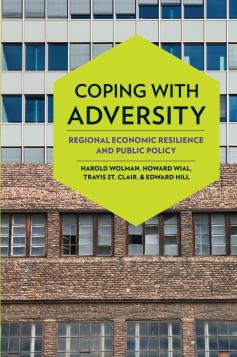 Coping with Adversity addresses the question of why some metropolitan-area regional economies areresilient in the face of economic shocks and chronic distress while others are not. It is particularly concerned with what public policies make a difference in whether a region is resilient.

NetworkWorld and ITWorld, June 5, 2017: Hill and his research on the Internet of Things, Industry 4.0, and Manufacturing 5.0 was the focus of an interview. Link.

Toledo Blade, Many Trump foes eager to see him act on NAFTA: But economists warn against protectionism. November 20, 2017.

Columbus Dispatch November 17, 2016: Coverage of my work on the cost of the electricity generation market re-monopolizing in Ohio: Link.

The Atlantic, November 10, 2017: Post-election analysis of the American Rustbelt: “Democrats do not have an easy answer for the Rustbelt." Link.

Columbus Dispatch, November 10, 2016: Will Trump’s victory be good for Ohio business? It all depends, Link.

Toledo Blade, October 10, 2016: Quoted extensively in 2-part series on the impact of trade on the domestic auto industry: Part 2, Employment for life fades as NAFTA blamed.

Cincinnati Enquirer, September 28, 2016: On the blame governor’s get for the economic performance of their states. Link.

Crains Chicago Business: August 1, 2016: Interview with Hill, How to shake off the rustbelt label for good.